Who do you call?

Does it surprise you to know that there are people out there on the web who want to separate you from your money? Let me tell you a story, one with a happy ending.

Just the other day I got a call from a long-time client, a woman of way above-average intelligence, blessed with common sense and good powers of observation. She had clicked on an innocuous looking link, on a normal website and immediately got a page that looked like this: 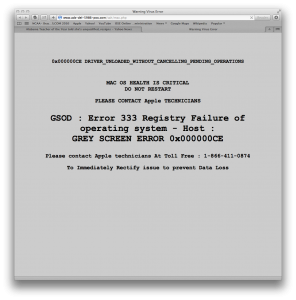 overlaid by the following modal dialog box with its information repeated about 10 times down the page: 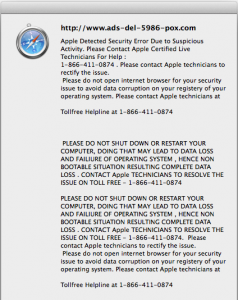 Distressingly, there was no apparent means to dismiss this modal dialog or even change the page (hint: Force quit – hold down command-option keys and press the esc key at the top left of the keyboard. Then restart the browser).

All these dire warnings convinced her to take immediate action and call that toll free helpline number, thinking there were legitimate Apple technicians on the other end.

You’ve probably already guessed – no legit Apple techs on the other end.

The initial call went to a call center in Bakersfield, California (or at least that’s where the guy on the other end of the line said he was located, and he spoke American English). Soon though it got bumped to a tech in – you guessed it – India. The tech told her they required remote control of her computer and that the cost of his “service” would be $299. She gave them her credit card number.

This helpful fellow proceeded to poke around in the Library (she wasn’t sure if it was the root Library or the user Library, but neither is a good place for suspicious characters to be poking around). Eventually as nothing seemed to be “working,” my client got suspicious, and demanded they get out of her computer and no, a 50% reduction in the cost of the service was NOT enough, she wanted the whole $299 back. Right.This.Minute. Apparently they fully refunded it, because it’s not on her bill. She’ll be watching that bill closely.

Then she called me and arranged for me to come, post haste, and give her computers a virtual shower. Ick. Who knows where that remote help software has been.

Now the silver lining to this cloud is that Time Machine has been doing regular backups of both her and her husband’s computers for more than a year, and there was a good backup for each computer from the day before this whole misadventure started.

So we booted to the recovery drive and restored from the backup of the day before the “Error 333” and in about an hour each computer was pre-“Error 333” clean.

This would not have had such a happy ending without that Time Machine backup.

So, there are a couple of morals to this story:

1. If you look closely at the 2 screens that popped up, you’ll notice some less than perfect grammar, spelling and syntax. This is the easiest thing to look for when you’re trying to evaluate the legitimacy of a message like this or even an email you might receive. I mean really – FAILIURE? FAIL. Any one employee of a major company may not have the greatest composition skills but any message being sent out to the public will endure such scrutiny that that employee’s inadequate education, typos or dyslexia will not reflect badly on that corporation. If you see these kinds of egregious mistakes, that’s NOT coming from Apple, Microsoft or Bank of America. End of story. If you’re still not absolutely sure – call the company from the PHONE BOOK or from their canonical website – like chase.com or apple.com or bankofamerica.com. NOT from clinking a link in a suspicious page or email.

2. If you do not have a backup from which you can fully restore your computer you are living on borrowed time. On the Mac, you can use Time Machine (built into the operating system) to make a restorable backup, or software like Carbon Copy Cloner or SuperDuper to make a bootable backup. Supplement that with a cloud based backup (NOT iCloud – it’s not going to do what you need) like CrashPlan or BackJack that backs up more often and off-site though you couldn’t restore your computer from it. The cost of a 1TB external drive (a 2.5 inch, portable drive) is around $100-130. The cost of off-site backup is about $60 per year. That could save your ass one day. I’ll write more about backups in a later post.

Taking the extra five minutes to evaluate the dire messages and see if they ring true will save you a lot of time, money and headache.

Even more importantly, backing up your computer is some of the most cost effective insurance you can get.

We Would Love to Hear from You