Upgrade your Mac to Sierra 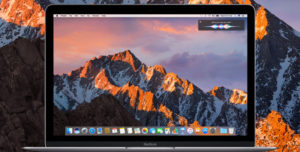 For those of you who don’t really pay attention to Apple’s latest pronouncements, on September 20 they released a new operating system, macOS 10.12 (first change – no longer called OSX) aka Sierra. This brings up the yearly question: Should you upgrade your Mac to Sierra (10.12)?

As always, there are tasty nuggets in the upgrade, like Siri for the Mac voice command which allows you to search for documents, send messages to a friend or colleague, change a meeting time in your calendar, and check the spelling of that word you always have trouble with (for me, that’s moccassin – nope, moccasin – and broccolli – sorry, broccoli – what is it about the double c?), amongst hundreds of daily activities you do on your computer.

Additionally there are other advancements such as in iCloud drive, in Photos, and in the ways that you sync data between your computer and your iOS devices.

However, for the first time in a number of years, Apple has dropped some older computers from the list of devices you can upgrade and some of the flashy new features won’t work on any but 2012 or newer computers (specifically with Bluetooth 4.0).

Here is the list of computers that support Sierra:

You can find your model information under the Apple menu in “About this Mac”.

and here is the list of computers that support the new Bluetooth features:

So should you upgrade your Mac to Sierra?

But, if you have an older Mac, that meets the criteria of the first list but not the second, there’s not really much driving the decision, except Siri.

A couple of precautions about any major change on your computer:

And for you folks holding on to an older system that can’t be upgraded (like me – both my computers are 2009), make sure you are running at least 10.10.5. Here’s why:
Apple offers security upgrades for only the last 3 operating systems: the current system, the last system and the one before. In this case, that’s 10.12 (Sierra), 10.11 (El Capitan) and 10.10 (Yosemite). 10.9 (Mavericks) and prior will no longer see security updates. That’s a legitimate concern. Of course the problem now is that Apple does not offer downloads of the previous operating systems. However I do keep installers of those OSs. I will not install anything prior to Yosemite, but I can install either Yosemite or El Capitan on your computer. I can also help with preparing and doing a Sierra upgrade.

Please call me at 303 459 3363 or contact me by email to plan your upgrade. We can schedule an appointment to have me upgrade your system.

We Would Love to Hear from You